OPERA NEWS ONLINE July 2017
The performance's strongest asset was Lucy Arner, named music director last year. She provided a thoroughly plausible musical framework, insuring an idiomatic, fluid traversal. Arner coordinated her soloists skillfully in ensembles; she had some good singers to command… In hiring Arner, Amara has engineered a laudable upgrade to the company's musical side.

…Lucy Arner and the Christchurch Symphony Orchestra were on top form caressing Puccini's pungent, bittersweet score with dramatic intensity that drew us into the work in a reading that was full of sensitivity and passion.  (Suor Angelica).

Under the baton of Lucy Arner, Offenbach had a sensitive and expert defender.  The conductor maintained the music at the adequate level of firm presence without ever covering the singers, a balance that is not always achieved.

...The great quartet at the end of Act 2 was worthy of note as one of the highlights of the evening, led by Cuban conductor Lucy Arner with the orchestra and chorus of Bellas Artes. ​Die Entführung aus den Serail

​
Baldwin-Wallace Conservatory, presenting Our Town in its Ohio premiere, has devised a production that honors Rorem, Wilder and [librettist] McClatchy and fields a cast that radiates musical and dramatic truth...Lucy Arner led members of the B-W Symphony Orchestra in an animated and graceful account of Rorem’s score.

Houston Chronicle, April 6, 2009
Conductor Lucy Arner draws an accomplished performance from the student orchestra, and the extensive choral work is likewise strong and often thrilling. ​[The Grapes of Wrath] 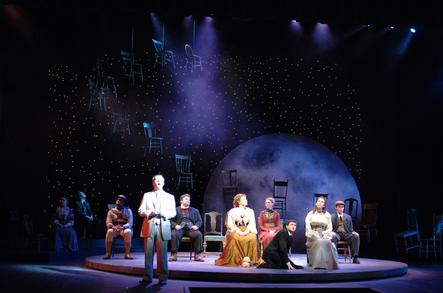 ​Guest music director Lucy Arner (a B-W alumna) and guest stage director Beth Greenberg have left their professional fingerprints all over a laudable production of Our Town, an opera by Ned Rorem...Ms. Arner kept the musical proceedings well under her thumb from start to finish.  Cast and orchestra were finely coordinated and balances were well maintained. The supporting cast of minor characters and townspeople were expertly dispatched and sounded lovely in choral and ensemble passages. 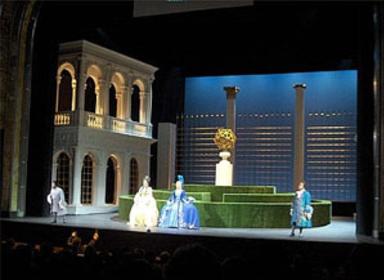 Opera News Online Jan 30,2011
Conductor Lucy Arner, making her FGO debut, scored a well-deserved success. The orchestra sounded wonderful, and she traversed the tricky patchwork of moods and meters that make up Hoffman with apparent ease and abundant style

Opera Today, Feb. 6, 2011
In another company debut, Conductor Lucy Arner seemed at home in the French Romantic repertoire. Arner’s keen sense of tempi and firm hand made rhythmic timing with singers — one of Hoffmann’s musical moguls — look easy. The type of delicate instrumental playing elicited for Nicklausse’s short solo in Antonia’s Act reminded that the conductor has extensive experience in chamber music.

...What a superb aesthetic experience!  The incredible music of Mozart, the world-class professionalism of the singers, the stunning set, the enthusiastic orchestra conducted by Maestra Lucy Arner (borrowed from the Met) - all combining in perfect proportion to produce an unparalleled evening of opera. Cosí fan tutte

South Florida Classical Review, Jan. 23, 2011
A bright spot throughout the performance was the excellent work of the orchestra, with conductor Arner conveying both the tripping, energetic sections of  Offenbach’s score, as well as its ominous moments, as with the accompaniment to Dr. Miracle’s evil musings on Antonia’s health.

…the tension moves the story along, with that wonderful dark and dramatic score beautifully brought to life by conductor Lucy Arner and the Christchurch Symphony.  (Pagliacci)

with an enjoyable Tosca in the BERGEN PERFORMING ARTS CENTER (October 15). What made the afternoon worthwhile—aside from an excellent pair of romantic leads and a conductor imbued with the proper style—was the dedication of all concerned to a kind of sincere authenticity increasingly rare in the operatic realm…The genuine spirit of opera came through, and this is the kind of company where developing artists can test their wings.

The music director Lucy Arner has overseen a definite improvement in orchestral quality and precision… She worked well supporting the soloists and the creditable chorus.

...the orchestra was rugged but not ragged: kudos to conductor Lucy Arner! It was Gioconda, all of it, sung and played with style and vigor

I’d heard the multitalented Lucy Arner for years as an incisive Italianate conductor and a deadpan drag king accompanist (Maestro Sergio Zawa) to the beyond stellar diva Mme. Vera Galupe-Borszkh. But I’d never heard Arner in an assignment like Schubert’s cycle, and it was salutary to hear such a surely weighted touch and well-calculated pace in the sober lyricism of “Winterreise.” The fine collaboration duly impressed an industry crowd in a most welcome concert.Type your paragraph here.

Ft. Lauderdale Sun-Sentinel, Jan. 24, 2011
...a performance marked by fine singing and another superb outing by the orchestra, this time under conductor Lucy Arner

Miami Herald, Jan. 23, 2011  CONDUCTOR EXCELS
Conductor Lucy Arner, making her FGO debut, excelled at following her singers and keeping the action moving, which was particularly important in a show that can easily stall in opera-comique shenanigans.

Verismo Opera ambitiously tackled Turandot on April 22 at the Bergen Performing Arts Center, providing an enthusiastic audience with a performance that proved very enjoyable...Puccini's final work is a huge undertaking for an underfunded local company, and the positive results spoke well to the organization's dedication. Principal conductor Lucy Arner, in place for two years now, has been a godsend to the company, steadily improving the level of playing; she offered a knowledgeable, idiomatic reading of Puccini's (and Alfano's!) score that anchored the afternoon.

It didn't take long into Act I to establish that the performance had, in its Liù and Calaf, strong assets well beyond the level of regional suburban companies. Yulan Piao--extremely sympathetic onstage and phrasing with care and feeling, showed a lovely lyric voice-winning in timbre. Philip Alongi easily ousting several Met Xalafs of recent years: his vibrant, squall-topped tenor carried easily (up to Act II's added "Corelli" high C) and his words emerged clear and meaningful. Supported by Arner, both Piao and Alongi employed a wide dynamic range.